My Experience with Volvo’s Kuwait Dealership

Below is an email I wrote to Volvo after tolerating a horrible service from their Kuwait dealership over the span of several months. My car was entered for servicing late October 2012, and I have yet to receive a decent update about its condition. But that’s only a fraction of the story.

I chose to buy a Volvo car for its reputation in safety standards, but I’ve put my safety at risk in the past months dealing with Volvo’s dealership in Kuwait.

It all started last summer when I received my car (2005 XC90) after having it serviced. I felt the steering wheel was a bit stiff, and informed the dealership, but didn’t think much of it. I was still able to drive my car safely, but less comfortably. I tend to resist dealing with the dealership because of their poor service and horrendous waiting times. I can spend over an hour waiting to have my car admitted into service or to receive my car after servicing.

After a few weeks I brought my car in for servicing, and they said they will look into the problem. They returned the car, having supposedly solved the problem. But the problem persisted, and so I brought it back in for servicing. The second time I received the car, I had a friend pick it up because he needed to borrow it. He told me that the steering will was stiff, but I couldn’t believe that Volvo would return the car for a second time without fixing the problem. I told him he must not be used to the steering wheel.

When I tried it out, he was right: the problem was not solved. This is after the service center had replaced the steering rack and several other components.

Bringing the car in for the third time proved extremely difficult, as the problem worsened. I couldn’t turn properly while driving, and couldn’t park the car in the Volvo service garage because I struggled with the steering.

I told the service representative that I will not be paying for any more for the same problem, especially since they had returned the car to me in a poor (and unsafe) condition, which they were not meant to do.

As someone interested in customer experience design, I was not impressed with the way Volvo’s service center was being managed, but thought I’d see what sort of mistakes the employees would make in dealing with this problem.

And I can safely say that this has been the worst interaction I’ve ever had with any company in any industry.

I did not hear from the service center for over a week after bringing in the car, and I had to call them up to enquire (a big “no no” in customer experience design, where you have to keep the customer informed, especially after a problem has occurred and the situation enters a Recovery Phase).

I was told that they were looking into it, but still did not know what the problem was. I was promised that the car would be ready in a few days, or that they would contact me to update me on the issue, but I was always the one to make contact, after waiting for several days or over a week.

I knew that I was entitled to a replacement car, but the service representative didn’t mention it. So I was the one to request a replacement car, and they said that they didn’t have any available but that they will try to sort one out for me. Again, making promises that go unfulfilled. “We will have one for you by Thursday,” but no call to confirm or even apologize for not providing a replacement car to me.

This persisted while dealing with the service representative and service manager, so I decided to speak to the brand manager to report the problem.

The brand manager was able to provide a replacement car on the same day. But the car was filthy (stained seats and sweets scattered on the floor of the car), so I chose not to use it, and to wait while I hear back from the dealership about my car to inform them about the condition of the replacement car. 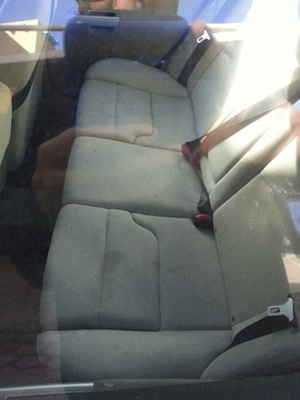 My brother needed to borrow a car so he asked me if he could use the replacement car. I told him about its condition, but he was desperate. When he came to pick the car up it would not start at all.

I called the dealership (after our National Day Holidays), and they brought a tow truck to pick up the replacement car. As they were towing the car I noticed that the car’s wheel was damaged (see below). 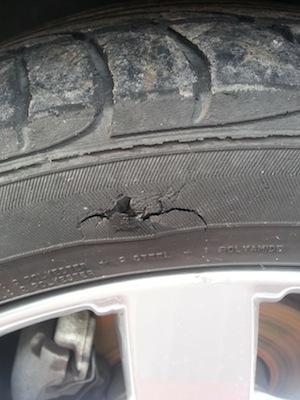 Although I was patient with all their misgivings, but this was intolerable, and may have put my life, my children’s lives, or my brother and his family’s life at risk.

I informed the dealership about this a week ago and have still heard nothing from them.

No word about another replacement car. No apology. Nothing.

It’s as if the dealership doesn’t exist or hopes that if they ignore the problem it (and I) might go away.

I have given the dealership ample time and many chances to course correct, but the same behaviors persisted, with no improvement. Other customers would have went to their service center yelling and screaming, and perhaps abusing their staff. I have done none of this, though the service center is inviting and encouraging such abusive behavior.

I am now looking to take legal action against the dealership and will publicly post my story for others to know how horrible Volvo’s Kuwait dealership is.

I urge you to look into this matter and to take action to protect your brand and to uphold your safety standards, which I know you genuinely cherish (and which your dealership in Kuwait apparently doesn’t).

I hope to hear from you soon.