How NOT To Respond To Negative Feedback

I created this blog because I believe there’s a lot of room for improvement in how companies treat their customers, and that a focus on the customer experience will serve both the company and the customer.

But I didn’t realize how badly some companies need this advice.

If the incident I’m about to share with you was portrayed in a movie, viewers would think it’s too fictitious.

But it took place. In the real world. By a company that should’ve known better.

I think an entire book can be dedicated to this one incident, but I’ll save you the hours of reading with this shorter serving.

Mark from 248am.com, possibly the most popular blog in Kuwait, shared his own experience of the newly-opened Benihana Japanese restaurant in Kuwait.

He thought the service was good, but the food was terrible.

And it turns out the food isn’t the worst thing the company has to offer.

Somebody at Benihana decided to improve the company’s reputation by posting a string of fake reviews that praised the restaurant’s food and service. 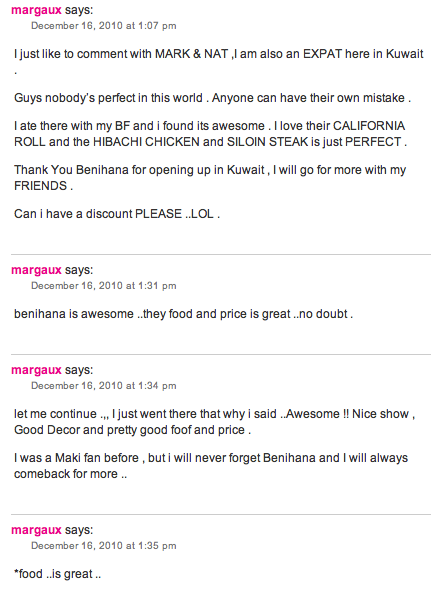 A String of Fake Reviews

I should point out that commenters usually link to their own site, but this commenter “margaux” was linking to aol.com. It seems to me that the commenter is absolutely clueless about blogging that he (or she) felt obliged to include a URL in the comment form, and so gave a generic link.

In addition to the fake reviews above, Benihana decided to add another “voice” to the conversation. This time linking to yahoo.com. 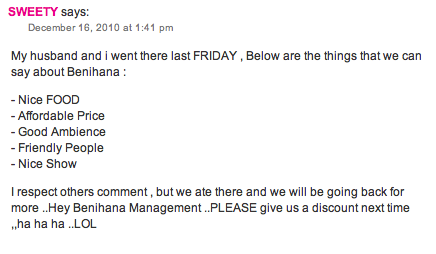 To appeal to a wider audience, Benihana decided to include a fake review from an Indian customer.

How nice of them!

And this time, the user links to gmail.com. An improvement on previous URLs, in my humble opinion. 😉

Sounds a bit racist to me. And very silly

Mark blew Benihana’s cover, and pointed out that the commenters are, in fact, the same Internet user, even though it’s not too hard to realize that the reviews are fake to begin with.

Mark reveals that the comments are from the same user

But this didn’t stop Benihana from continuing their deceptive tactics, and the fake reviews continued…

And another fake review

Rather than admit their fault, Benihana decided to condemn Mark for posting a negative review, which could hurt their business. 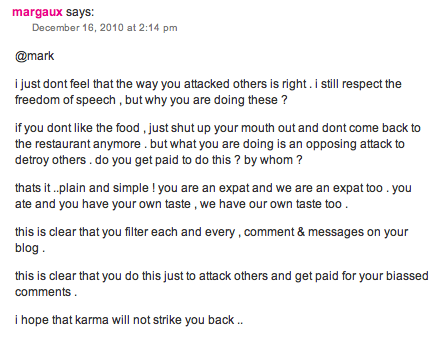 Benihana gets aggressive with attacks and accusations

Telling your customer to “shut up your mouth out” will do more damage to your business than any negative review could ever do. I think that’s a universal law, as true as gravity itself.

Although the comments above don’t necessarily point to Benihana (since they could’ve been posted by someone who doesn’t like the way Mark’s reviews influence his readers), the following comment is an official statement from Benihana. 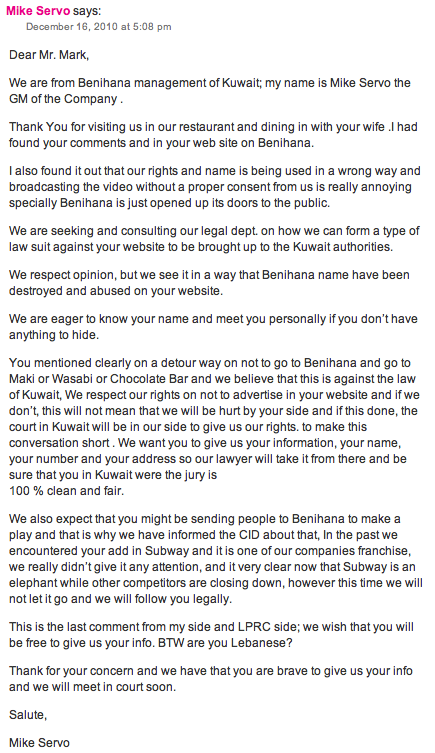 I don’t know about you, but I find this letter extremely offensive (but amusing at the same time. In a tragic kind of way, of course).

Several readers chimed in, and many criticized the way Benihana handled the review, citing Benihana’s actions as their reason for not visiting the restaurant.

How does Benihana choose to respond?

By criticizing the commenters!

The General Manager responds to a commenter

What Mr Servo failed to realize is that customers don’t simply judge a company by the service they provide.

Benihana could have the best food and eating experience known to Man (and Woman), but customers also care about the overall approach a company takes in dealing with customers.

A negative review reveals what a company prioritizes.

Do they care more about their reputation or their customers?

Are they willing to incorporate the feedback they receive to improve their service, or will they defend their service at the expense of their customers?

Mark revealed on Twitter that Benihana is going through with lawsuit, which will be hurting their reputation even more.

Companies make mistakes. All the time.

And there’s no shame in admitting when a mistake has been made, and to try and correct it as soon as possible. That’s the only way forward, and no amount of evasion or perception management can serve a company that has made a mistake it’s not willing to admit or take responsibility for.

In fact, it costs more to fabricate a lie than it is to own up to a truth.

Benihana needs to apologize to Mark for the way they handled his review, they need to drop the lawsuit immediately and offer any compensation as a result of their actions.

That’s the least they can do to apologize.

And it’s up to Benihana to decide what more they can do to turn this negative customer experience into a great one.

What’s your take on this whole incident?

And will it influence your decision to visit Benihana?

UPDATE: Mark posted the court order on his blog.